The Peninsula Metropolitan Park District was formed on May 18, 2004, by a vote of the people on the Gig Harbor Peninsula, outside the City of Gig Harbor.

The Park District provides for the management, control, improvements, maintenance, and acquisition of parks and recreation facilities within the area of unincorporated Pierce County west of the Tacoma Narrows Bridge and east of the Purdy Bridge (excluding the City of Gig Harbor).

Prior to 2004, a park and recreation district existed but had no taxing authority aside from what it could obtain through the voter-approved initiative. This district was formed in 1984. During that period, 15 bond or levy measures received a strong majority of support (55-59%) yet fell short of the supermajority (60%) necessary for approval. One $6.5 million bond measure was approved to develop Sehmel Homestead Park but a companion maintenance levy failed with only 59% of the vote and as a consequence, the park development bonds could not be sold.

In 2004 the District managed 12 acres of park property. The PenMet Parks District park system currently includes 595 acres of park land. In 2005 the District hired its first full-time employee, an Executive Director. Its first adopted budget was approximately $250,000 funded entirely through zoo/trek/park sales tax. By April 2005, the District had its first administrative office and by September 2005, hired its second employee to manage its financial operations. In 2006, the District began its first collection of property tax enabling it to fund capital projects and on-going maintenance and operations. As of October 2019, the present administration and recreation office is located at 5719 Wollochet Drive Northwest #3  Gig Harbor, Washington.

The Story of Sehmel Homestead Park 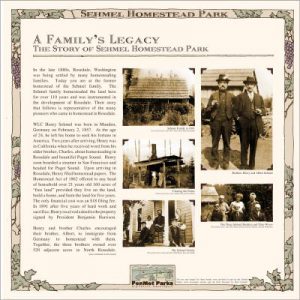 In the late 1880s, Rosedale, Washington was being settled by many homesteading families. Today you are at the former homestead of the Sehmel family. The Sehmel family homesteaded the land here for over 110 years and was instrumental in the development of Rosedale. Their story that follows is representative of the many pioneers who came to homestead in Rosedale.

WLC Henry Sehmel was born in Munden, Germany on February 2, 1857. At the age of 24, he left his home to seek his fortune in America. Two years after arriving, Henry was in California when he received word from his older brother, Charles, about homesteading in Rosedale and beautiful Puget Sound. Henry soon boarded a steamer in San Francisco and headed for Puget Sound. Upon arriving in Rosedale, Henry filed homestead papers. The Homestead Act of 1862 offered to any head of household over 21 years old, 160 acres of “free land” provided they live on the land, build a home, and farm the land for five years. The only financial cost was an $18 filing fee. In 1891 after five years of hard work and sacrifice, Henry received a deed to the property signed by President Benjamin Harrison.

Henry and brother Charles encouraged their brother, Albert, to emigrate from Germany to homestead with them. Together, the three brothers owned over 520 adjacent acres in North Rosedale.

Charles’ wife, Johanna, introduced Henry to Dora Gummert who was a bookkeeper in Celle, Germany. Henry and Dora corresponded for some time. Dora was convinced to come to Puget Sound and see the natural wonders for herself. In a letter to Henry, she wrote that he would recognize her at the end of her long journey because she would be carrying his most recent letter in her hand. Soon after Dora’s arrival, the couple married in 1887. Together the couple had four children: Carl, Adolph, Elsa and Ernest. Only three survived to adulthood. Ernest drowned in a well at age two. Henry and Dora’s 50th wedding anniversary on November 15, 1937, was celebrated by the entire community. In addition to farming his homestead and engaging in the logging industry, Henry worked on developing the country roads in the area and supervised the development of this early infrastructure for nearly 15 years. Henry was also active in civic affairs. He served on the school board and was a prominent pioneer in Rosedale’s and the surrounding communities’ development. 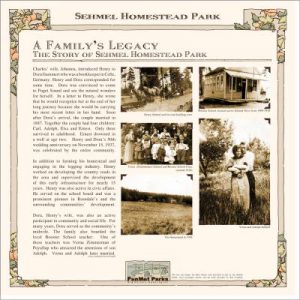 Dora, Henry’s wife, was also an active participant in community and social life. For many years, Dora served as the community’s midwife. The family also boarded the local Booster School teacher. One of these teachers was Verna Zimmerman of Puyallup who attracted the attention of son Adolph. Verna and Adolph later married. For many years Dora hitched up her horse and buggy every Saturday, to travel to Gig Harbor and then ferry to Tacoma to sell her eggs and farm produce and visit friends. n 1938 at the age of 81, Henry suffered a heart attack and passed away. Henry and Dora’s oldest son, Carl, never married, but cared for his mother until Dora’s death in 1948 at the age of 89.

Henry and Dora’s second oldest son, Adolph, and his wife, Verna, built a home near his parents and had three children: Doris, Elva and Donald. Adolph and Verna were very active in local civic affairs. Like his father, Adolph served on the local school board for many years. Verna passed away in 1937. Adolph later married Ethel Truetle in 1943. The Sehmel Homestead was bequeathed to Adolph’s son, Donald, and his wife Mary Ellen. Donald and Mary Ellen raised their children on the family homestead. Donald owned a drug store in Gig Harbor. Mary Ellen was a gardener who nurtured a Christmas tree farm on the property and also cultivated an extensive rhododendron collection with over 100 varieties.

Over 100 years later, 98 acres remained of the original Sehmel Family Homestead. Pierce County Parks and Recreation purchased the land in 2002. Donald and Mary Ellen’s son, Bill, was instrumental in developing the family homestead into the Sehmel Homestead Park. 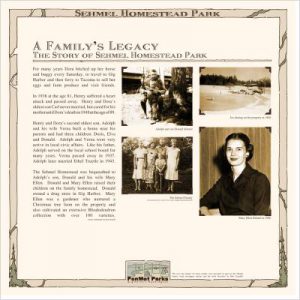 Funding was provided by County Conservation Futures funds, Washington State’s Interagency Committee for Outdoor Recreation (IAC) and numerous private individuals and organizations. With the public’s participation, this park was created to provide active recreation for the community and take advantage of the site’s natural beauty and rich family history. As you explore and enjoy the park, remember Henry’s pioneering spirit, Dora’s horse and buggy trips to Tacoma, Verna’s adventurous will, and the lives of four generations of Sehmels who lived here for over 110 years.